Every business, regardless of size, needs phone service. While cell phones are becoming more commonplace for sales reps or executives on the go, for the most part nearly every business still relies on having phone handsets and some sort of landline phone service, be it analog, VoIP, or PRI/SIP trunks.

Along with that phone service, companies need to have a reliable local phone system as well. Some smaller businesses with only a few employees and phones can get by just fine with individual handsets and one shared voicemail box. Medium and larger businesses tend to prefer having a hardware-based phone system to handle voicemail, extensions, and call routing between phones (and locations).

Over the past few years Hosted PBX services have started to gain popularity not only for their functionality, but also for the cost control they provide to businesses. New companies can quickly get up and running with a Hosted PBX system, while companies with older legacy PBX systems are moving towards Hosted PBX rather than undergo the expense of purchasing and installing a whole new hardware phone system.

So just what sort of cost differences are involved? Let’s take a look. 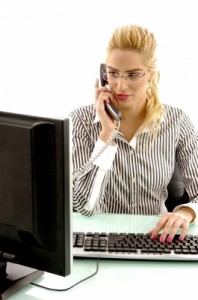 One easy way to look at the up front costs for a traditional local PBX service is to look at the number of users/stations the phone system will need. A conservative estimate is between $500-$800 per employee. This cost factors in the price of the individual handsets, the main PBX hardware needed (the actual system itself), and the cabling/wiring required to operate the system. Many newer phone systems are “hybrid” solutions that can use both traditional analog phone service as well as VoIP, and will often have phones that run off of Cat 5 cabling instead of analog copper wiring. If the phone system needs to run off of a separate internal network than the existing Cat 5 cabling that the computer network uses, the additional new wiring could be one of the factors that drives up the installation costs of a new phone system.

Ongoing maintenance is another factor a business needs to consider when looking into a local PBX system. Extension adds and moves usually need to be taken care of by an outside phone vendor who is familiar with that phone system, and your office. While the vast majority of phone installers provide excellent customer support and service, those visits to take care of adding a new phone or resolving a wiring or hardware problem can add up; figure $180 minimum per visit over time, and those monthly costs start to grow quickly.

Your business still needs to pay for monthly phone service as well. For traditional analog based services, a typical average is around $40/month per line once you factor in taxes, fees, and surcharges (costs would be more around $20-$30/month if they used VoIP). A business with 20 employees will typically have at least 8-10 lines to make sure they have enough calling capacity, so that would put the monthly phone service costs in the $320-$400 range. Don’t forget, those monthly costs are on top of the $15,000 – $20,000 phone system purchase and installation costs. So on the low end, let’s say total cost of ownership over 5 years is anywhere from $35,000 – $50,000.

There are two major differences between traditional legacy PBX systems and Hosted PBX. The first difference is that there’s no local phone system front end hardware to purchase, install, or maintain. The only purchase costs a business incurs are to buy new IP phones, which can range anywhere from $100 – $250 if purchased new. Since all the voicemail, phone menus, and interactive features are taken care of by the Hosted PBX provider, there’s no other local hardware needed. In most instances, IP phones are designed to go in-line with the existing computer network, sitting in between a PC and an existing jack. This helps both eliminate the additional wiring costs, as well as helping to ensure local Quality of Service when it comes to voice traffic. 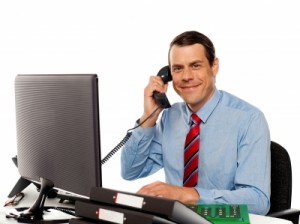 Since there’s no local hardware to maintain (aside from the phones) the overall monthly operating costs are much lower. Users can simply pick up their assigned phone, plug it into a new jack, and the Hosted PBX system will automatically register it – no need to bring in a vendor to move an extension somewhere else in the building… or even to another completely separate building, for that matter. Hiring new employees will typically involve the cost of buying a new phone only, which will either come pre-configured, or can be configured quickly by using a web browser-based administrative system.

The second major difference comes with the monthly operating costs. Hosted PBX service uses VoIP, which traditionally comes with an overall lower cost than analog phone service. However, Hosted PBX costs will run a bit higher than basic VoIP service, since the costs for the Hosted PBX provider to host the voicemail, IVRs, extension mappings, etc. are usually built into the monthly line costs. To keep going along with the above example of the 20 employee company, let’s say monthly costs are between $400-$600 for the Hosted PBX service.

Now, you may immediately look and that number and say “Hey! I thought VoIP costs were lower?” You’re right – they are lower. But here we’re factoring in the monthly dialtone for 20 users, plus offering all the normal PBX features in addition to ones like Find Me/Follow Me and Voicemail to Email (to name a few); these are features the local PBX would normally serve, but now they’re being hosted on the network of the Hosted PBX provider so those costs need to be factored in.

When you look at the same total cost of ownership over 5 years as we did above, you really see the difference – on the lower end, $3000 startup plus $24,000 for total usage gives us a total cost of $27,000. MUCH less than the traditional phone PBX/service costs noted above.

These figures are just looking purely at hardware and monthly phone service costs; one also has to consider the time involvement and productivity gains Hosted PBX can offer to a business (which we’ve covered before). When a business considers those potential assets, Hosted PBX begins to look even better in comparison.

If your business is looking to upgrade or change out an older PBX system, or your new business is researching potential phone system options, Hosted PBX may fit your budget and your user needs a lot more than you think!