It’s important to note that the local loop makes up a good portion of the costs on services like T1 or Metro Ethernet. DSL, for example, often has a low monthly cost because it’s being delivered over a simple copper phone line; Ethernet over Copper also has a lower price point than Metro Ethernet because it’s using copper vs. fiber. Because that local loop is it’s own dedicated connection back to the carrier, bandwidth and performance are always guaranteed on services like Metro Ethernet or T1 (again, unlike shared line services such as DSL or cable modem).

Since Metro Ethernet is growing at a rapid rate, many carriers are eager to advertise their own products to help gain new clients. Marketing takes many angles, as providers tout the various aspects of the service including the reliability, upgradability, etc.

For argument’s sake, let’s use that 1:1 example. One T1 line delivers 1.5M of bandwidth. One Metro Ethernet connection delivers 10M of bandwidth on the low end, and can be upgraded to 1Gb (if not higher) in many situations. Let’s say that the T1 is $399/month, while the 10M Metro Ethernet connection would be more around $999/month (all pricing based on location and availability; some areas may have lower or higher costs based on available facilities).

So we can easily see that the variables aren’t the same – a business could spend 60% less per month on a T1 line. They’d have less bandwidth, but if that’s all they needed, moving to Metro Ethernet wouldn’t be cost effective.

Now let’s look at a situation where a company has multiple T1 lines, we’ll go with two T1 lines bonded to 3M at a cost of $749/month. Now the price gap is closer, but Metro E is still more costly (while definitely delivering more bandwidth). With such a closer gap, now a business should definitely consider a move to Metro Ethernet if they anticipate needing more bandwidth in the near future, maybe due to increasing the number of employees, or heavier use of online applications.

If we look at a comparable bandwidth comparison, it would take 7 T1 lines to deliver 10.5M of bandwidth to a company, which as we saw before would be most comparable to an entry level 10M Metro Ethernet connection. Assuming a bulk discount on the T1 lines since there’s so many, let’s say they’re $300 each; $300 x 7 = $2100/month for 10.5M of bandwidth. NOW there’s a definite cost savings with Metro Ethernet ($2100 vs $999 monthly) however you can’t quite say it’s comparable as there are very few businesses bonding 7 T1 lines together.

Of course, if a company is using a fractional or full T3 connection currently, then the lowered costs/higher bandwidth of Metro Ethernet are extremely attractive while also being a definite upgrade.

One could point out that high speeds are capable on some of the lower tier services we mentioned above, without needing to incur the costs of Metro Ethernet; while that’s definitely true, those services don’t have the reliability, guaranteed speeds, or low latency of Metro Ethernet. In addition, those services have a much lower upload speed, which can drastically hinder performance of many applications commonly in use nowadays such as VPN and VoIP. So lowered costs may not equal higher performance, which is why many businesses that need mission-critical Internet access opt for Metro Ethernet.

Costs are always a key decision factor when any business reviews new potential services and solutions; a new Internet connection is no exception. Metro Ethernet will always offer best in class reliability, bandwidth, and upgradeability to any company that needs mission-critical Internet access. 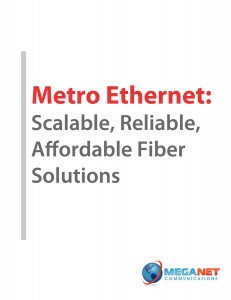 For more information about Ethernet services for bandwidth use, download our free eBook “Metro Ethernet: Scalable, Reliable, Affordable Fiber Solutions” to learn more about how Metro Ethernet Internet access can help your business. Reliable Internet access is critical when considering any business plan, and our case studies in the book will help show you how we can help in almost any situation. Download the free eBook from MegaNet today!