Telecommuting With the Proper Internet and Voice Tools 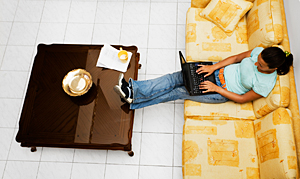 This week, one of the biggest pieces of news (if not *the* biggest) was Yahoo’s announcement to their workforce that as of later this year, they could no longer telecommute. With high speed Internet access in nearly every residence, companies have become quite used to, if not encouraging of, workers telecommuting on an occasional or full time basis. Based on the responses from article writers, bloggers, and online commenters, it seems that many people feel telecommuting is a valid way to complete work, with a number of articles pointing out how productive employees can be when working remotely. On the other hand, some businesses point out to the collaboration factor that comes into play when employees share the same physical office space (Google comes to mind), and the personal sense of camaraderie quick water cooler chat can bring to co-workers.

Telecommuting has definitely been on the rise; the article linked above notes a 66% increase in telecommuting between 2005 and 2010. With home Internet connections becoming faster and less expensive along with improvements with remote access services such as VPN and Hosted PBX, employees can theoretically work from home with as much productivity and ease, if not more than, they could in the office.

So what elements should come into play when allowing employees to telecommute from home? Let’s take a look at three basic services that can allow nearly any employee to work from home and provide the same features and functions that they may have in the office.

High Speed Internet connection – Having a reliable Internet connection at home, be it DSL or cable modem based, is essential to telecommuting. Many businesses are moving towards Software as a Service (SaaS) and having a reliable high speed connection to access those services is critical. Email applications (Google Apps, Hosted Exchange), contact resource managers (Zoho CRM, Salesforce), and collaborative tools (Basecamp) can all be used either in the office or from any other location with a high speed Internet connection. Some companies still host internal applications or servers, however, when it comes to sensitive information like billing or financial records, which leads us to…

VPN – Establishing a Virtual Private Network between the telecommuter’s computer and their office network is an absolute must-have any time sensitive information is being accessed. When offices offer remote VPN services to employees, they can be assured that any internal information that’s flowing over the Internet isn’t being intercepted and copied or used maliciously. In addition to the security standpoint, some VPN services also allow employers to log traffic that goes over the VPN – so a person “working” from home will leave a trail as to how much work was done via their VPN connection, establishing a way for employers to check in on productivity.

Phone service – Today’s business world is seeing a large increase in the amount of calls being made by cellphones, but many companies still prefer to be able to reach employees by simply dialing a three digit extension on their phone. With Hosted PBX services, telecommuters can have an IP-based phone at their home office with an extension on the company’s phone system, allowing co-workers to dial their extension as if they were sitting just across the room from them in the office. Or, telecommuters can log into their Hosted PBX options from any web browser (or directly from their PBX phone even) to set up call forwarding – this will allow any calls to their extension to ring their cell phone instead, or perhaps their home phone, so they don’t miss any calls.

Advances in technology have really allowed companies to extend work flexibility to their employees. Long, draining commutes have given way to more productive and refreshed employees, while creative bursts that may occur on off-hours can quickly be translated into real projects before the inspiration fades. Telecommuting can allow workers to have a job they are not only good at, but love regardless of their location. By using any combination of high speed Internet service, VPN access, and Hosted PBX services, businesses can increase employee morale and productivity by offering flexible work schedules.

Of course, some of those Google Campus perks aren’t so bad either….

We're passionate about all things related to telecommunications!